The water feature at BSBO's Anna Macke Mikolajczyk Window on Wildlife has been hopping with migrants and vagrants (Selasphorous hummingbirds). The banding station has not experienced a large volume yet, but we have seen a nice variety of birds. Seventeen species of warblers were seen or heard including Tennessee, Nashville, Chestnut-sided, Magnolia, Cape May, Black-throated Blue, Black-throated Green, Blackburnian, Bay-breasted, Blackpoll, Black-and-white, American Redstart, Ovenbird, Northern Waterthrush, Connecticut, Common Yellowthroat, and Wilson's Warbler over the weekend.

Swainson's Thrushes (SWTH) and Blackpoll Warblers (BLPW) are still increasing in numbers. Veery, (VEER), Gray-cheeked (GCTH), and American Robin (AMRO) were the other thrushes seen during the weekend.

A strong cold front arrived on Tuesday and brought in more northern migrants. We have had a Winter Wren (WIWR) and a couple White-throated Sparrows (WTSP) filtering in but more are yet to come.

With southerly breezes we are catching some species that have worked their way back north for a brief time. Several Chestnut-sided Warblers, a Yellow-bellied Flycatcher (YBFL), and Eastern Wood-Pewee (EAWP) ventured into our nets to be banded. Most of the flycatchers are well south of us by mid-September.

Quiz bird for you: 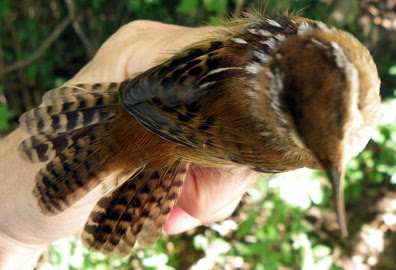 Some highlights of large-billed birds: 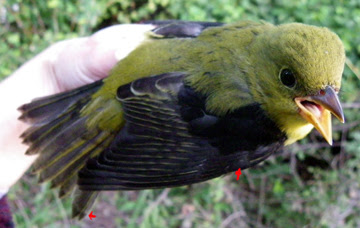 Quiz Bird Answer: Marsh Wren. Note the dark triangle on back and white superciliary line above eye and dark cap.

Check the Navarre banding totals to see where we are at in migration and compair to last year http://www.bsbo.org/passerine/pdf/passerinebandingfall2012navarre.pdf