Connecticut Warbler in Ohio - In July

Posted by Mark Shieldcastle, BSBO Research Director: The more we study birds the more we realize we have a lot to learn. There is so much more out there than what we see in our “normal field of view”. Binoculars and field guides revolutionized our knowledge of birds but maybe no other tool has done more than the act of capture and marking birds. Banding has taken ornithology to heights that could not be reached without this simple but powerful technique. Case in point, the special visitor to the Navarre Banding Station on 25 July.
Each summer, following the exhaustive spring migration study, BSBO researchers begin breeding bird banding projects. These studies, part of the Monitoring Avian Productivity and Survivorship (MAPS) program begin in early June and continue into early August with field work once in each 10 day period. In Navarre, to coincide with this operation, we also operate the main migration station simultaneously after the 1st of July. It was here we had our surprise guest in the nets. One of three birds captured in the first round was an adult female Connecticut Warbler (CONW). 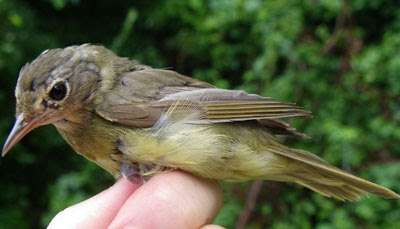 This bird was in full molt and looking quite ragged. Extensive measurements were taken for verification of species, sex, and age, including an unmistakable brood patch. The brood patch was representative of those we are seeing on Yellow Warblers (YWAR) and Common Yellowthroats (COYE) at this time. Our Connecticut female appeared similar to those following young around or having recently left young.

To facilitate field recording of bird names, alpha codes were developed by the Bird Banding Laboratory for every bird species in North America; no two can be the same. For species with two parts to their name the general rule is to use the first two letters in each part of its name. However, the Connecticut Warbler represents one of the exceptions to this rule. Can you guess why? The answer will be revealed at the end of this post! 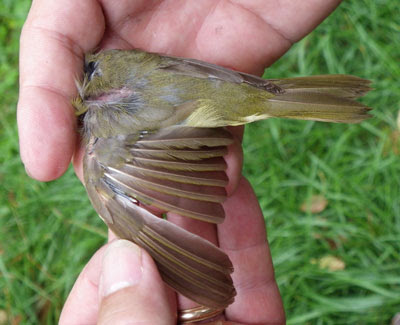 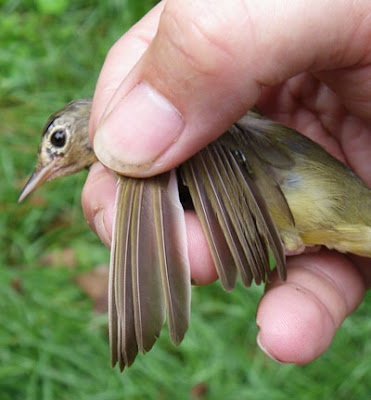 CONW has a pointed wing with p9 (9th primary) longer than p6, while the rounded wing of a MOWA has p6 longer than p9 in most all birds. 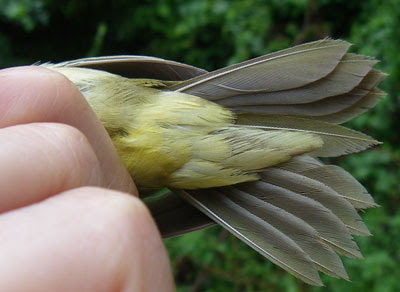 What is the significance of this little visitor? For one, it is most likely the first of its kind ever recorded in Ohio during July. Second, with its breeding condition, could it have nested here? Third, is most perplexing, if not a breeder here, why so different than what is known of this species biology? Granted, how much is really known about the CONW? Maybe a little more than one might think.

The species is one of the latest spring migrating warblers with similar behavior in the fall: fall migration beginning in late August from its breeding grounds. Peak migration in Ohio is reported in the literature as mid-September to early-October with no reports earlier than the last week of August. Nesting is documented as June into July with fledging late July. The summer adult Pre-basic molt is reported to occur July to August PRIOR TO MIGRATION.

There are two different molt strategies employed by our warblers each summer. Most, like the CONW and the Magnolia Warbler (MAWA), complete the molt prior to starting migration while others like the Tennessee Warbler (TEWA) and Chestnut-sided Warbler (CSWA) start prior to migration but may continue as they migrate south. 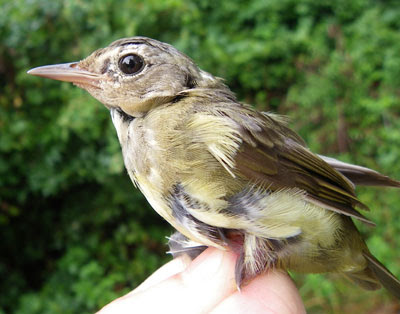 So why is it here now, in July, when by all accounts it should be at the closest the very northern reaches of Lower Michigan? Let’s throw out some possible scenarios to consider:

1) It did in fact nest here in Navarre; or at least tried to. Was there also a male CONW that stayed? We did have individuals singing until the end of May. Or did it stay with a male Mourning Warbler (MOWA)? We have documented males of this species the past two years on territory throughout June. Was it injured or sick resulting in an abnormal migration? Still, that was one good brood patch. Did the Buttonbush swamp in Navarre fit the “bog nesting criteria needed”?

2) It did try to nest somewhere reasonably close, failed, and dispersed to the Lake Erie marshes prior to fall migration. This is being observed in a wide range of passerines such as orioles, phoebes, and maybe even the YWAR where we capture large numbers of young. It does appear this behavior is primarily of hatching year birds. There is no indication in the literature of such a “dispersal migration” in adult birds of this species. We had a similar situation a few years back with a Worm-eating Warbler (WEWA) female. We’re not thought to be part of breeding range for this species either. The big difference is the majority of the WEWA range is south of the marshes which would fit a northward post breeding movement that is documented in a wide range of species but not a pre-migration southward movement from a more northern breeder.

3) A third possibility is that this bird either represents a behavior we just don’t know about or one that defies all known literature and left not only a month early but also violates known biology of the molt sequence of the species.

Will we ever know the truth about this encounter? Maybe not. The only way to be as close to “sure” as we can hope to be is by catching the young as well. Only banding may shed light on this interesting feathered friend.

If you want to learn more on the role of banding over the past century+, join us at the Inland Bird Banding Association meeting we are hosting October 29-31. Learn more here: Black Swamp Bird Observatory

To answer the question regarding exceptions to the alpha code rule: COWA cannot be used for Connecticut Warbler (CONW) because of the Colima Warbler (COLW).