I wonder why I get up so early?

Another very slow week, some days I wonder why I get up so early to catch a handful of birds. Wednesday was especially a yawner with a total of 5 birds for the day. Birds do not look at the calendar so they migrate when the conditions are right. This week the winds were predominantly out of the East and Southeast so not much migration occurred here. It did give us time to really study the birds we did catch.

August fall songbird migration encompasses the southward movement of flycatchers, Yellow, Canada, and Prothonotary Warblers. These species will not be around by mid-September when the higher diversity of warblers will be in the marsh region.

For the week, 61 new birds were banded. Another 12 recaptures can be added to the total capture for the week. Twenty-three species including 7 species of warblers were caught in the mist nets. The warbler species were: Wilson’s, Magnolia, American Redstart, Common Yellowthroat, Northern Waterthrush, Chestnut-sided, and Black-throated Blue. Eastern Wood Pewee, Traill’s Flycatcher, and Eastern Phoebe comprise the flycatcher guild for the week. Veeries made an appearance and were the second highest species caught for the week with six individuals captured. Gray catbird was the big catch with sixteen birds netted. 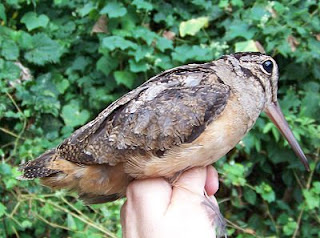 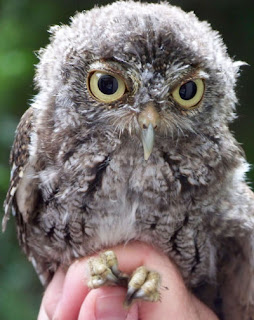 Highlights for the week were the American Woodcock and an Eastern Screech Owl. The woodcock was a male with its narrow outer primaries and shorter bill than the female. The owl appeared to be the runt of the clutch with a high percentage of its juvenile plumage still remaining at this late date.

Black-throated Blue Warbler males are one of the few that do not have a different basic plumage for immatures and adults. This is a hatching year (immature) male with its green edged primary coverts and alula. 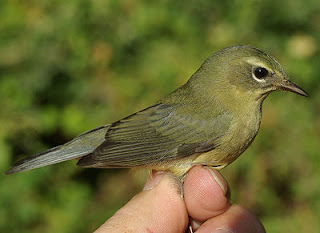 The female is also a hatching year bird above and has no white on the wing. I have seen some hatching year females with some white at the base of the primaries making up the wing patch.

Take time to enjoy the season,