Second day out = three new species for the spring!

Another bluebird day for early spring! Eastern Phoebe, Fox Sparrow, and the first Hermit Thrushes graced us with their presence. Eastern Phoebe and Fox Sparrows were present yesterday but never came in for a closer look or to be adorned with research jewelry (AKA a band). I learned something new today. Did you know that the tongue on a Yellow-bellied Sapsucker has a serrated tip? The tongue on a Northern Flicker is smooth and sticky for eating ants. This makes total sense to me. However, a bird that eats sap most of the time needs a serrated tongue? Apparently it does. Here is the proof or it is an anomaly. The male sapsucker yesterday did not give me the opportunity see if his tongue was serrated or not. 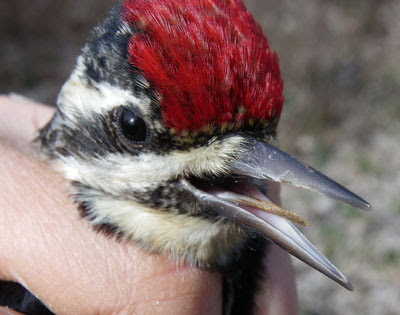 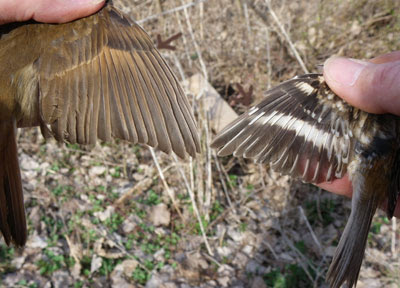 Did you ever think to look at the wing on a Brown Creeper (bird on the right)? Notice the wing bar-stripe on its wing. There is a wing bar window-stripe on the Hermit Thrush too. It is more visible on the underside. 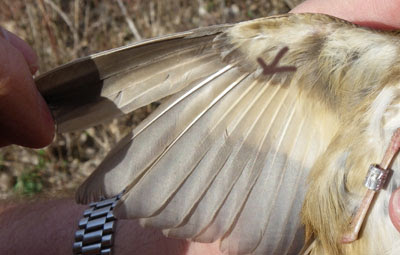 If you happen to be driving at dusk or dawn and a thrush-size bird flies in front of your headlights and you see a flash of a light-colored window in the wing, it was a Catharus thrush. (Just a bit of trivia for you.)

Another neat thing I noticed today had to do with two different looking species of sparrow(Melospiza and Passerella). BUT can you see something in common?
I see a series of breast feathers that come together to form a spot on both birds. That was my observation for the day! 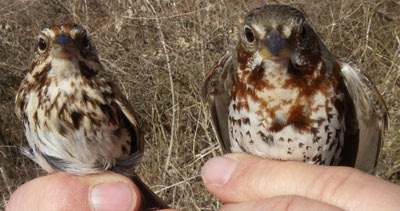 As I have said many times before, you never know what nature may surprise you with! Enjoy!