A brisk morning turned into a beautiful day in the marsh. A House Wren was singing along with a lone Fox Sparrow male serenading the last female of its kind; A Yellow-bellied Sapsucker squawking on the Basswood trunk, and a number of Barn Swallows migrating; What a day!
There were quite a few Myrtle and Western Palm Warblers singing on site but they stayed high in the trees. We did have the fortunate opportunity to catch two Palm Warblers. Nineteen new birds and ten recaptures were banded today in 5.25 hours. One recapture was a Dark-eyed Junco from a week ago. Light northerly winds produced by a high pressure system has some birds sitting tight.


How about a lesson on aging female Red-winged Blackbirds while there is not 99 different species flying outside your window?


Female Red-winged Blackbirds in their first-winter molt and up until their second winter molt have yellow pigmentation in their upper secondary coverts (also known as the epaulet). This time of year the bird would be called a second-year bird for its age class. Here is an example of a second-year bird: 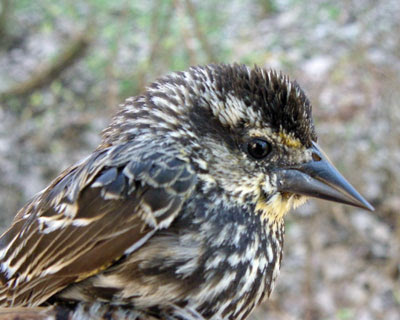 Those after their second winter molt are considered After-second year birds and have most times more orange and red than yellow such as this bird: 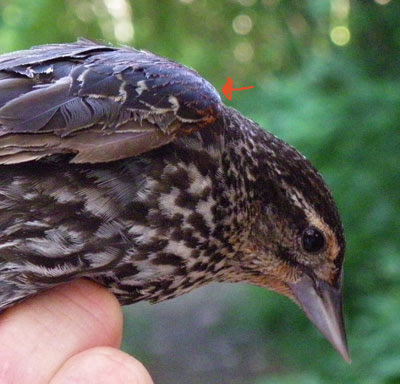 The older females generally have more orange on the face as well.
It sounds like the high pressure system will be around for a couple more days so more sunshine and probably not much change in bird numbers. Enjoy the day!
Posted by BSBO Research Staff at 3:32 PM