Another sunshining beautiful day with light northerly winds produced a handful of birds in the nets. I did not spend the morning in the marsh today. I was assisting Kim Kaufman, Executive Director at the Observatory with a banding and migration program for 75+ Perrysburg High School students. It went very well and the students were pretty sharp -- once they woke up.

Mark and crew banded 24 new birds and 5 recaptures. Highlights for the day were Pine and Western Palm Warbler. It had been a few days since either one of these had been seen. Here they are to brighten the day! The Pine Warbler is an adult female. She does have some yellow on her but not much. 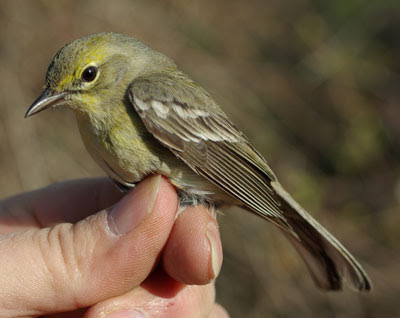 Below is the Western Palm Warbler. Even though you are not able to sex the birds accurately by any measurements as of yet, I would bet that this one is a male with that large clean rust cap on its head. 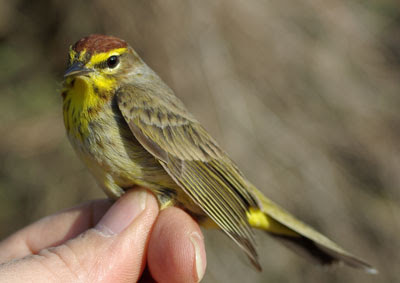 Another new banded House Wren for the week. I guess many of them are not leaving the country during the winter. I know I would, just to be where the temperatures stayed above freezing! Enjoy the Day!