Mix of species from all three migratory songbird waves

Southerly winds were expected today and with that wind I thought the birds would follow. We had good diversity of 32 species and 15 warblers banded. However, the volume of the “Big Wave” was not this day. The low tonight is to be the high for most of this day of 56 degrees with tomorrow to be a high of 75 so I am betting on tomorrow for the big day! I can be as wrong as the weather people. The winds are forecasted to be SW so it still will not be a bad day of birding regardless.

Early morning produced a female Whip-poor-will in the net. She is an older lady with small amount of white in her tail but not full white spots as a male would have. The Whip is shown here being held to display the wing for aging and sexing. The large amount of buff on the secondaries describes an adult. Nightjars have weak fragile legs so this bird is held in this position as to not injure it for a study picture. 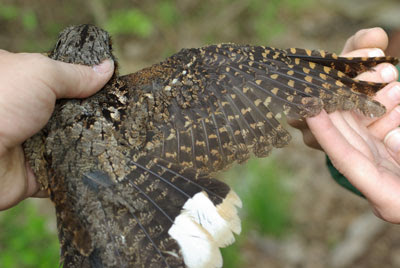 (THIS IS NOT KNOWN AS A BUFF-COLLARED NIGHTJAR AS SOME PERSON IS QUICK TO REPORT TODAY!)

Besides this highlight we had two other new species for the spring which included an Eastern Wood Pewee and a subdominant of the third wave songbird migration, the Wilson’s Warbler. We also netted two Worm-eating Warblers which are overflights of the first wave and another male Golden-winged Warbler. What an interesting day!

One hundred twenty-five new birds were banded with 39 recaptures. The warbler species were Golden-winged, Nashville, Northern Parula, Yellow Warbler, Chestnut-sided, Magnolia, Myrtle, Black-throated Green, Blackburnian, Western Palm, Worm-eating, Ovenbird, Northern Waterthrush, Common Yellowthroat, and Wilson’s. The Gray Catbird numbers are increasing as they should this time of May. Can you hear them? Sometimes I think I may have nightmares of catbirds calling nonstop. 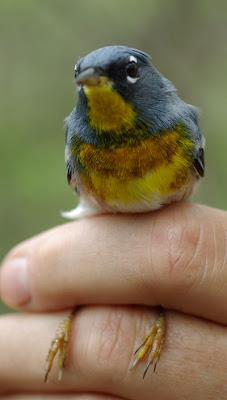 (I had to show this beautiful male Northern Parula!)

Today was the first day for good numbers of Least Flycatchers which are the first Empidonax flycatcher to come through. This is the small gray round headed flycatcher. The male sings “CheBek!” or sort of sounds like a hiccup to me. Whatever works for you to remember the song is the important part. 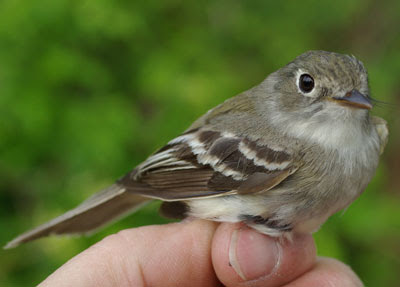 Quizbird for you all of you today: go for it! Enjoy! 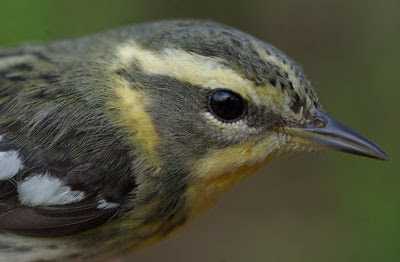 SO do you know what it is? 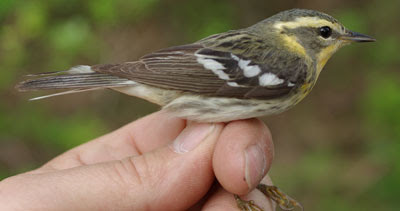 Your time is up! The best female warbler in the World! Blackburnian Warbler! See the facial markings which are the same as the male only gray instead of black as the male has.

It is always good to enjoy the females because there would be no males if there were no females.

Have a good day!