Northeasterly winds made for a low catch for the day. Mark and crew mustered 51 new banded birds with 30 recaptures. Still a good number of warbler species around with sixteen being seen in Navarre including Yellow, Chestnut-sided, Magnolia, Black-throated Blue, Black-throated Green, Bay-breasted, Blackpoll, Black-and-white, American Redstart, Prothonotary, Ovenbird, Mourning, Common Yellowthroat, Wilson’s, and Canada. It looks and sounds like we might have a Black-and-white going to nest in Navarre. It has been on a territory for a week. We shall see. The Black-throated Green Warbler is still singing in the same area as well. Who knows who will stay and who will go?! We have had a Mourning Warbler nest at the site a few years back. We know that because we captured the female with a brood patch in July and the male had been singing all June. We have had a pair of Eastern Screech Owls nesting out there almost every year. A fuzzy youngster has been clacking its bill for most of the week while setting up the nets and Mark saw him perched in one of the locust trees this morning.

It appears that the last push of spring songbirds will come on the southwest winds tomorrow. The low is not a tropical wind but coming from the Dakotas. What comes of it will probably be the last of anything substantial for spring migration. A sad thing to say but the numbers and species are telling the story.

Guess what?! Another foreign recovery today! We caught someone else’s American Redstart that they had banded. The data for this bird was in the computer of the Bird Banding Laboratory so we know that the bird was originally banded in Ontario on August 21, 2008. So it has made quite a journey so far!
Top 6 species:
Common Yellowthroat – 10
American Redstart – 7
Canada Warbler – 5
Magnolia Warbler – 3
Red-eyed Vireo – 3
Swainson’s Thrush – 3

The last of spring migration is the Wilson's Warbler farewell. He is extraordinary for such a small bird which is smaller than an American Goldfinch to travel the distance they do from as far south as the Panama and as far north as Alaskan Aleutian Islands. However, those coming through Ohio are not going to Alaska but to northern boreal forest of Ontario. Populations are declining in the west and until recently are showing declines in the eastern parts of their range. Widespread elimination and degradation riparian, pond, and bog edges on their breeding grounds appears to be contributing to the decline in this species according to Boreal Songbird Initiative. The wintering grounds of this warbler seem to be not the threat since they utilize disturbed and transitional habitats. The trials of a small songbird... All the more reason to ensure we can help them get to the breeding grounds in good condition! The terrific stopoover migration habitat we have in Ohio is important to this species as well as many others. 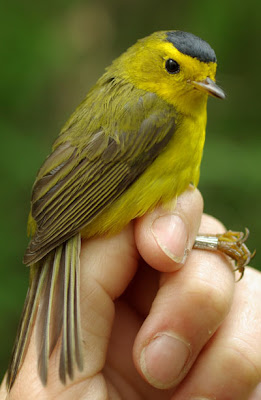 As well as the last farewell to the migrant Ruby-throated Hummingbirds. Take a look at the throat of a male where you can see the ridges on each individual feather on the throat or gorget! 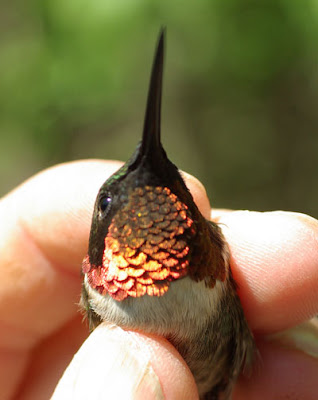 Until tomorrow.... Have a good day!
Posted by BSBO Research Staff at 4:17 PM