A bright spot in the day! Yellow-throated Warbler

A very interesting day! The winds in the upper atmosphere were out of the NW and the ground level winds were south. The point count and first net round check were pretty slim. However, by the second net check we were bombarded again with Myrtle Warblers. The second round we probably had a hundred Myrtles. I had the volunteers put the Myrtles in their own bag to quicken the banding process. Well, as I reached in to pull out a Myrtle to band after banding 50 or so, I gasped when I pulled out a bird with similar colors as a Myrtle but was one of the overflight warblers we had not caught this spring. We have only caught 3 prior to this in the course of 20 years. It was a Yellow-throated Warbler. It was a female with a brilliant throat patch. Despite its blinding throat color it was a second-year female. It lacked the black on its forehead and was definitely a second-year bird. 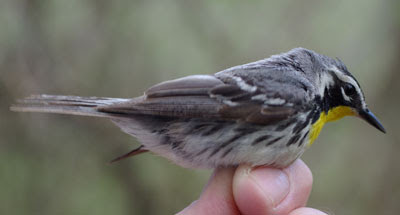 To summarize the day after that great sight, we banded 265 new birds with 33 recaptures. Nine warblers were banded with 13 observed. Interesting was the return of a female Prothonotary Warbler and a Common Yellowthroat. Both of these species nest here at the site. These returning birds now can rack up the years to seven! These birds have made it 7 years traveling 4,000 plus miles a year on migration. Can anyone really fathom this feat?! I surely cannot. Highlights for the day were the Yellow-throated Warbler, the old lady Prothonotary Warbler, and this bird: Red-bellied Woodpecker. Let’s hear it for the girls! 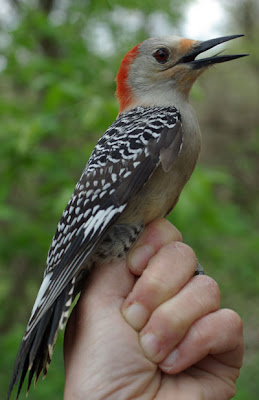 The larger birds were almost nonexistent today. It looks like the second wave is shaping up for Thursday as it looks now. The low pressure system is over Colorado coming this way. Low temps of 60 that morning and a high of 70 with a SW wind. Keep watching the weather and you will predict when the next wave will come!