Still a variety of warblers around... 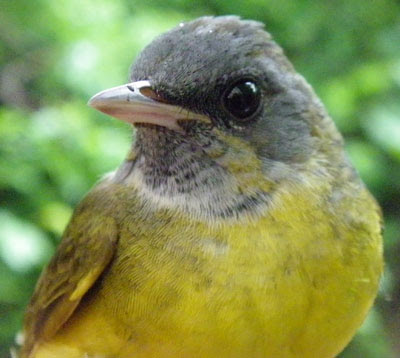 It is definitely a Mourning Warbler but to say "Gee, that must be a female" might not be true. It sure could be an older female since the black on the chin/front is not on the chest as you would expect for a male. However, the wing chord of the bird was long and it was decided it was a male. I would rather have a DNA test to check for the official sex of the bird. This just goes to show not all birds fit the mold.
First species for the year and I am making it a Quiz bird. Here is the back: 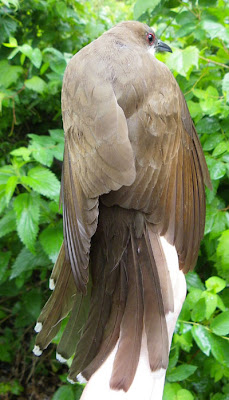 One hundred forty new banded birds and 27 recaptures. We had a really old Common Yellowthroat male. I know because it was a returning bird with one of our bands. It is in the old paper database so it will have to wait a day or two to find out how old he really is. This will be exciting!
Top 7 species:
Swainson's Thrush (SWTH)-25
Common Yellowthroat (COYE)-13
American Redstart (AMRE)-11
Magnolia Warbler (MAWA)-8
Gray Catbird (GRCA)-8
Indigo Bunting (INBU)-7
Ovenbird (OVEN)-7
Quizbird from the side: 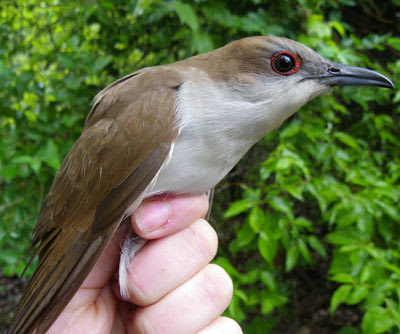 Now you can see the black bill. Black-billed Cuckoo. However, you do not need to see the bill to ID this as a Black-billed Cuckoo. It has a red eye ring and long tail and wings, and the wings are the same color as the back and tail. If the wings were reddish-brown contrasting with the brown body it would be a Yellow-billed Cuckoo and they have a yellow eye ring. No need to look at the size of spots on the tail. The other field marks tell more than the tail spots.

And the grand finale is the best female warbler in the world! 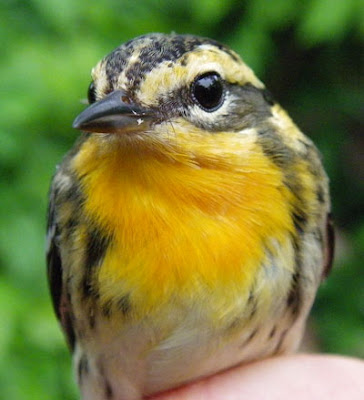 The winds are to be south so make a good attempt to get outside this weekend!
Posted by BSBO Research Staff at 5:25 PM