May Day proves to be birdful!

After a light rainy start we had a great diversity of 34 species banded. It was another White-throated Sparrow day... and will be for a week or so. Besides the cool singing sparrows, there were 14 warbler species banded and 3 more species heard. Warbler species include Blue-winged, Golden-winged, Orange-crowned, Nashville, Northern Parula, Yellow, Myrtle, Black-throated Green, Western Palm, Black-and-white, Prothonotary, Worm-eating, Ovenbird, Northern Waterthrush, Common Yellowthroat, Hooded Warbler, and Yellow-breasted Chat. 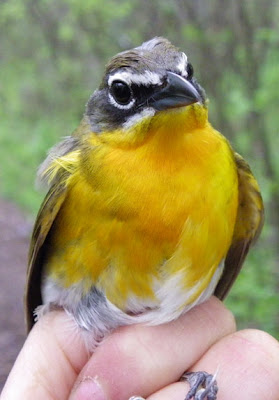 A handsome male Yellow-breasted Chat. The inside of the roof of its mouth is black as opposed to pink in females. How appropriate...if girls like pink. 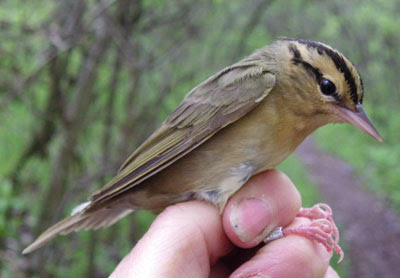 Worm-eating Warbler, one of the Overflight warblers of the first wave. It has overflown its normal breeding range. That is why it is termed an "overflight" warbler.

One hundred and forty-one new banded birds with six recaptures. Four recaptures were returning banded birds from previous years. This is almost as exciting as catching a foreign banded bird that someone else banded and we have caught in the net. Today we had an old Maullador Gris (Gray Catbird) banded in 2006, two common Yellowthroats and a House Wren from last year. The Yellow Warbler caught yesterday was banded in 2006. One of the benefits of a long running research station. We have the longevity record for Yellow Warbler in the country at least as far as we know and that is an 11 year old female :). She has been places I have never seen.
Ever really looked at the back of a Golden-winged Warbler? Well, here it is. Could you guess it was a Golden-wing by the back? 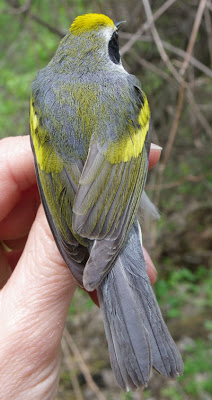 Here is the front to admire as well. 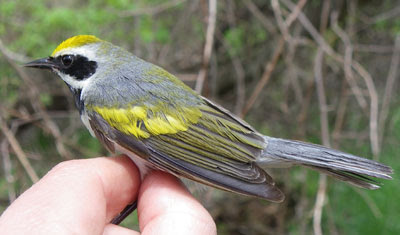 Highlights for the day in addition to the warblers were another Sharp-shinned Hawk and a Lincoln Sparrow. Lincoln Sparrows will be here in better numbers around the second wave (May 7-13th).
Top 6 species:
White-throated Sparrow (WTSP)-56
Gray Catbird (GRCA)-12
Myrtle Warbler (MYWA)-6
Ruby-crowned Kinglet (RCKI)-6
House Wren (HOWR)-6
Western Palm Warbler (WPWA)-5
Morning rain tomorrow but it still should be good to be outdoors. After the first wave of songbirds come, everyday is good after that. Some are just better than others. Enjoy!
Posted by BSBO Research Staff at 5:28 PM