Great finds on another southwester...

Today was a day to beat all days! The wind of course curtailed the nets from being 100% efficient at sampling the songbird migration. Gusts of 30 mph can cause this. Despite this weather aspect we netted 334 new birds with 9 recaptures. Forty-two species banded with 115 species seen and or heard on the beach ridge. Eighteen warblers were captured with another 23 species seen. The first Magnolia Warbler showed up. We will see plenty more of them in the next wave.

Five Hooded warblers were another prize for the day along with our first Blackpoll Warblers. There were so many highlights to mention. There was a lonely Winter Wren around. We have not seen one in several days. It had better get north with the rest of its kind.

Here is one of the most interesting birds we caught today: A White-throated Sparrow (WTSP). Are you all excited and wondering what is the big deal about a WTSP? This one will get attention so take a look. It has had something occur with the growth of the feathers on its head. I don’t think it is a partial leucistic bird but not sure since the lower mandible is slightly lighter colored. This bird had no color available when the feathers molted in. It also has the white symmetrical tertials as well. It is hard to say what happened here. If we could see what the bird looked like after another molt that might tell us something. Would it be a good quiz bird?

I wonder what this would have been called by birdwatchers? It would be identified correctly by most since it still had its yellow lores. 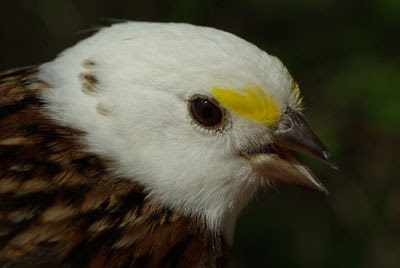 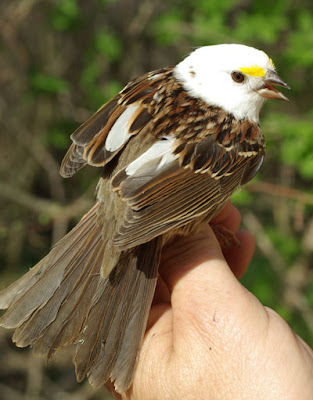 Another great find was our first Sharp-shinned Hawk for the season BUT it was already banded! That means that someone else banded it elsewhere! This is considered a foreign recovery. The number was entered on the Bird Banding Lab website and it said has not been reported yet. We will have to wait until the bander has reported his/her bands to find out where it was originally banded. 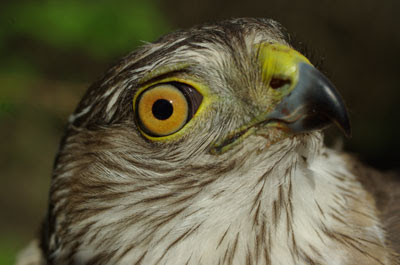 The weather is finally going to change for tomorrow. It was about time a cold front came through. Some are glad it waited until the weekend was over.