The first wave of migrant songbirds has hit the region

If I was a betting person, I would have put some money on this being a good day! I should have said a Great Day! For a day in April I am sure it broke some records for bird species for some people’s list. Southwest winds kicked up throughout the day and you would have thought it was Christmas in April! The wind did curtail the effectiveness of the mist net. With the net stretched out from the wind, I saw many a birds bounce out of the net. Despite the wind we spent 6 hours monitoring migration capturing 327 new birds and 13 recaptures. Thirty-nine species of bird were netted including 13 species of warbler. Worm-eating Warbler was seen on the beach ridge.

It is obvious that the first wave of migrants were here. Dominant species of Hermit Thrush, Myrtle Warbler males, Ruby-crowned Kinglet males, White-throated Sparrows, and the subdominants including Nashville Warbler and Western Palm Warbler. Both tanagers were heard with us lucky to catch a Scarlet Tanager male. Boy, did he glow!

One of the unusual birds was this quiz bird. It is unusual because it is a female. It was the first day for this species on the site and it happened to be a female.

Another highlight is the Great Crested Flycatcher—notice its great crest and it big mouth to catch insects. 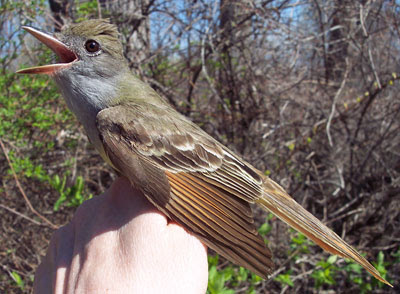 Another big day planned for tomorrow if the winds would calm down a bit!
Enjoy!.....Quizbird is Tennessee Warbler-subdominant of the second wave.