The overnight winds were out of the SSW so the morning was pretty decent with the wind shifting to the east off the lake for our site by 10:00 AM.
We had a pretty neat sighting today. While putting up the nets this morning I flushed a Long-eared Owl! It flew around and landed near one of the nets but soon flew when I came up to the net to raise it. It was a gorgeous bird! And you don’t know how bad I was hoping when it took off and flew back towards the other nets that were open that it would fly into one of the nets---but no luck there! It was still a neat experience.
A male Whip-poor-will was also seen bouncing off a net early. A Blue-headed Vireo was heard but a White-eyed Vireo was all we caught in the vireo family. Early in the morning over 400 Blue Jays passed over while I was conducting the point count. They of course do not like to cross open water so they would fly to the lake and turn around and go the other way. It was interesting that Lee Garling, Hawk watcher for BSBO on the Magee Marsh Wildlife Area Hawk Tower did not see any Blue Jay movement.
For the day we banded 128 new birds and 5 recaptures. There was 23 species included in those birds captured. Seven warbler species were captured; Black-throated Green, Nashville, Western Palm, Yellow, Myrtle, Pine Warblers, and Northern Waterthrush. Five species of sparrows including Lincoln’s, Swamp, Song, White-throated, and Eastern Towhee were caught today. Another first for the year was a Swainson’s Thrush mixed in with the Hermit Thrushes.
Top 6 Species were:
White-throated Sparrow - 35
Myrtle Warbler - 26
Ruby-crowned Kinglet - 16
Hermit Thrush -10
House Wren - 7
Western Palm Warbler - 4 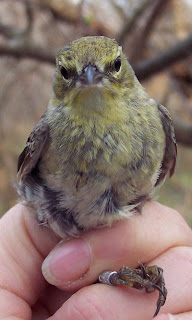 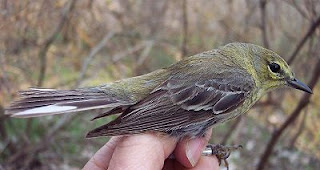 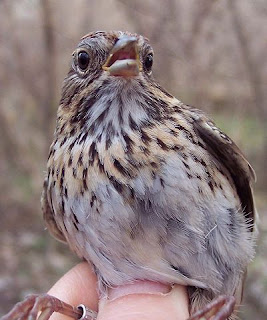