This is the first official day of the blog but the sixth day of banding at the Navarre Marsh Passerine Migration Monitoring Station for the spring season. We have been running this project everyday for 19 years during the season weather permitting. Several early short distance migrants are bringing up the tail end of their appearance here (Fox Sparrow, Golden-crowned Kinglet, Eastern Phoebe, Song Sparrow). Many warbler species (over 14) have been seen in the Lake Erie Marsh Region. The Navarre station has only recorded 7 species with 4 of them banded ( Myrtle Warbler (Yellow-rumped), Common Yellowthroat, Orange-crowned Warbler, and Western Palm Warbler). Those warbler species heard were Yellow Warbler, Pine Warbler, and Black-and-white Warbler.
Banding protocol is to take each species down to its lowest denominator. Yellow-rumped Warbler is a lumping of the two races of Audubon’s Warbler which is found normally west of the Mississippi River and Myrtle Warbler which is the eastern race. To monitor if these races will merge west or east, it is important to keep detailed records of the races. Another example is the Blue and White morph of the Snow Goose. In keeping records of these different races we can document climate change in their northern breeding ranges. Blue Snow Goose is moving northward. Snow covered tundra is receding north favoring a darker bird to nest on the tundra. Much can be learned about species by keeping the details.
There have been several days of southerly winds but they have been dominated by two strong high pressure systems. A strong passerine migration for Ohio is when the low pressure system moves across the country hits the Oklahoma/ Arkansas region and moves up the Ohio River Valley. This front's movement will bring warm temps and warm winds from the Gulf of Mexico. We have had years where high pressure systems sit on top of Ohio and make a good sunny day but make a very poor day for bird migration through northern Ohio. Migration is weather dependent. Where the fronts are located determines a good or bad migration.
Today’s top six species:
(43 new banded birds with 12 recaptures)
White-throated Sparrow - 12
Ruby-crowned Kinglet - 9
Hermit Thrush - 9
Slate-colored Junco (Dark-eyed Junco) - 2
Swamp Sparrow - 2
Northern Cardinal - 2 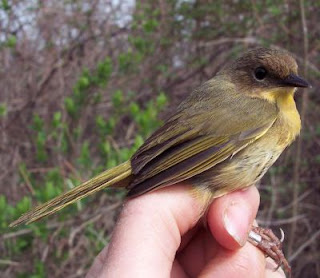 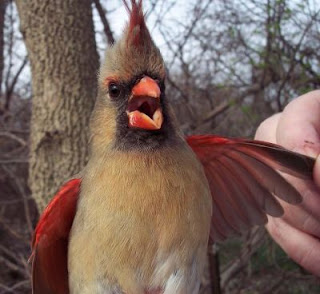 Even though Northern Cardinals are resident and non-migratory we captured this brilliant colored female. The bright red orange color underneath her wings was quite striking. Note the orange beak, most folks don’t think their beak is orange.
We caught our first Blue Jay for the year. There were a few migrating yesterday and today. Blue Jays are diurnal migrants and can be seen migrating in large numbers in May.
This bird is an After-second year Blue Jay which means it is at least in its third year of life. Birds get a new birthday every January 1st. The primary coverts on the wing are bright blue with black barring. A second year bird would have duller blue primary coverts and no barring. Second year birds were hatched last summer. They are in their second year of life. 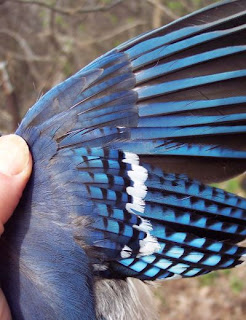