Misty morning with a light southerly breeze (5-10 mph) caused the Myrtle Warblers to stay down low which enabling us to capture 30 of them today.

An ornithology class from Wittenberg University joined us for the morning. The students were treated to 19 different species. We captured 4 species (Blue-winged Warbler, Myrtle Warbler, Northern Parula, and Palm Warbler - read on >) and after the group left we caught a Yellow Palm Warbler which is an over flight warbler often caught the latter part of April if seen or caught at all in Ohio.
The Yellow Palm Warbler is the east coast race of the Palm Warbler. In Ohio, the Western Palm Warbler is common and has a tan or washed out chest. Today we caught a male Palm Warbler but I believe it was definitely not a “Yellow” because its chest was not as brilliant as I have seen on male Yellow Palm Warblers on the east coast. I am not 100% convinced but our master bander, Mark Shieldcastle, is convinced it is a Yellow Palm Warbler so I will leave it to the person who reports it to the Bird Banding Laboratory.
Below you will find photos of this bird, so you decide for yourself. It definitely is “yellower” on the chest than any Western Palm Warbler I have seen and I imagine there are intergrades in the population. 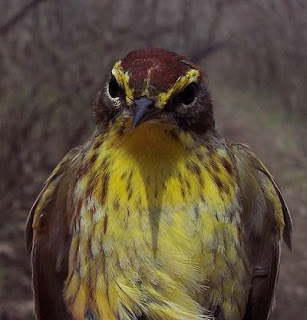 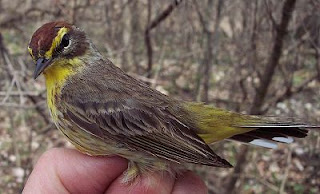 The coolest bird (okay it is hard for me to determine the best bird of any day unless it is a Blackburnian Warbler!) was a Northern Parula. It was a beautiful male! Check this bird out: 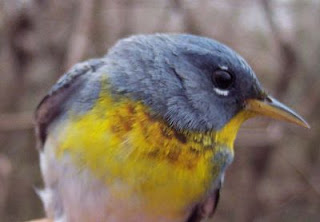 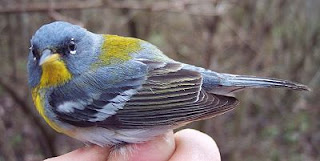 The male has a rusty necklace whereas the female does not have this trait. Characteristic of the Northern Parula is the green triangle on its back. Also note the parula has a bi-colored beak which is a unique feature.

For the day’s capture of new birds we caught 19 species of 78 individuals and 16 recaptures (recaptures are birds previously banded). We caught several banded White-throated Sparrows today.

The winds turned off the lake about 10:30 AM and the air turned cooler. The prediction for tomorrow from weather.com is for lake winds so I believe it will be a slower day. It is early in the spring so we cannot be wishing for knockdown drag out busy days because then the spring would be over too soon!

Enjoy the days as they come!