Great time to see Rusty Blackbirds in the marsh region

Rusty Blackbirds have been present in the marsh about a half hour after sunrise and sporadically throughout the morning with a greater tendency to appear just before noon. They will mix in with other blackbirds but you can hear their distinguishing call of a clinky warble. I do not know how else to describe it. Once you hear it you know it is a Rusty Blackbird from then on. Do you think they may use the call of the Rusty Blackbird as a "wild" sound in a movie. Probably not.
Species diversity is waning, but the American Tree Sparrows have not made it here as far as I have seen, so winter is not officially here. I suppose the official date is December 21st for the winter solstice or as I have been told, meteorologists say December 1st. So whichever your winter date preference, we still have a long way to go before winter sets in. I am thinking positive! Bird banding in Navarre however is winding down. A few more days here and there before the station will be closed for the season.
Many, Many THANKS to all the volunteers who have put in time this year for the good of the project. Your assistance has been invaluable. I hope to see you again soon.
Here are some highlights and some helpful aging and sexing clues to ponder. 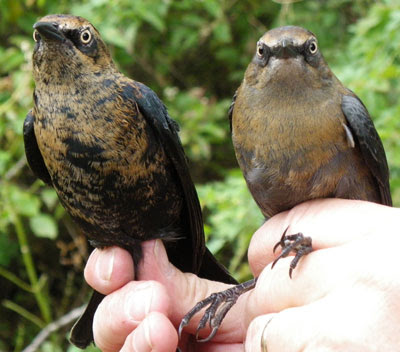 Above is an adult male Blackpoll Warbler. Note all the many defining black streaks on its back and upper tail coverts. The shadow on the rump makes it difficult to see the rump but this is a diagnostic characteristic in the fall for sexing Blackpolls. There are also other characteristics such as wing chord and aging by the primary coverts. (P.S. I hope you positively ID'd this warbler before I told you!)

Which one above is a "Blue-head"? Here is a Nashville Warbler on the left with its eye ring, gray head, yellow breast, and no wing bars or tail spots. The right bird is a Blue-headed Vireo with its "blue" head (I would call it gray), white spectacles and wing bars. There is also a size difference with the beaks too. 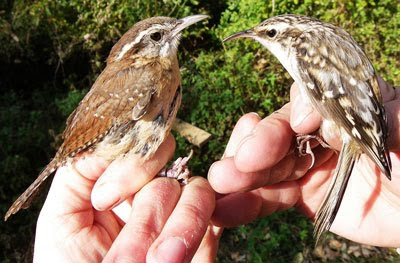 And because I like the curved-billed birds, here are the Carolina Wren and Brown Creeper. Enjoy the warm days. It looks like by the weekend the Fox Sparrows should arrive in better numbers.
Posted by BSBO Research Staff at 4:31 PM