First Rusty Blackbird for the fall

Kinglets are in! I really hope you have had the opportunity to watch the little birds. The kinglets are such energy machines for such little birds. Today there also a good movement of American Robins. They have been moving most of the week but decided to pay us a visit on this day. They were our second highest species banded. It was a good day for all the later fall migrants. You will see when you look at the top species list. The highlight for the day was our first Rusty Blackbird. 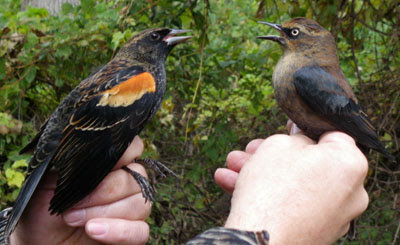 I had heard them a couple days ago. Rusty Blackbirds received their name because of the rusty tipped feathers on their head and chest. This coloration wears away by spring and leaves the iridescent black of the male Rusty and the duller gray of the female. The Rusty Blackbird is the same size and shape of the well known Red-winged Blackbird. This is what I wanted to show in this picture but asking two birds to cooperate at the same time is like asking two kids to behave for pictures. It usually does not happen.
Today was a good day for a late push of Nashville Warblers. We caught five along with a nice looking female Black-throated Green Warbler. Other warblers for today include: Tennessee, Myrtle, and Blackpoll. Information from our friend Kristen in New Jersey, she says the Myrtle Warblers have funneled themselves to the coast. She reports lots and lots of them. The weather patterns last week must have pushed them down the east coast. We surely are not overwhelmed with them around the SW end of Lake Erie.
Main inside top species:
Ruby-crowned Kinglet- 27
American Robin-27
Golden-crowned Kinglet-25
White-throated Sparrow-17
Hermit Thrush-17
Cedar Waxwing-8 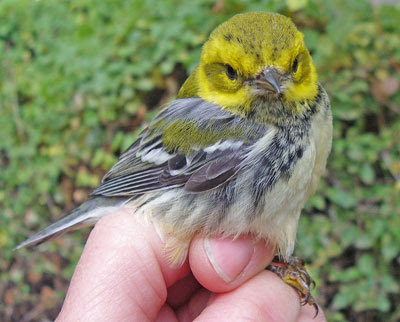 If you look at the alula feather (thumb feather) you can see it is duller brown and off color from the greater coverts. This tells you it is a hatching year bird.
Have a great day!
Posted by BSBO Research Staff at 8:23 PM