The Strong WSW winds do not deter the warbler diversity!

Too windy for a lot of things today but there were still birds around if you could get outside. What do you think about 16 species of warbler?! These warblers include: Tennessee, Nashville, Chestnut-sided, Magnolia, Cape May, Black-throated Blue, Myrtle, Black-throated Green, Western Palm, Bay-breasted, Blackpoll, Black-and-White, American Redstart, Ovenbird, Northern Waterthrush, and Common Yellowthroat. One hundred eighteen new banded birds and 15 recaptures. The wind hurt the efficiency of the nets today but still produced some nice birds for the day. Highlights include Chestnut-sided Warbler and this warbler which is first for us this fall season. 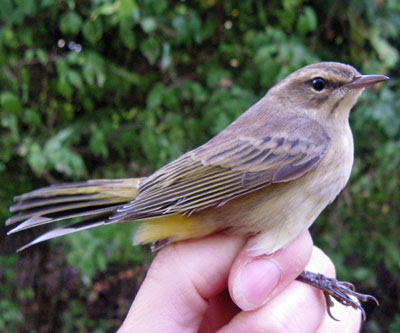 We still have not seen any Hermit Thrushes. However, they have them up north so they are on their way. The bird above is a Western Palm Warbler so memorize it because someday it will be a quiz bird!

A quiz bird for you to ponder: 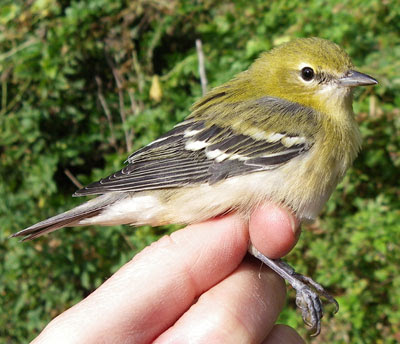 And this bird is for your Tracy! Everyone likes the fall plumage of a Chestnut-sided Warbler! 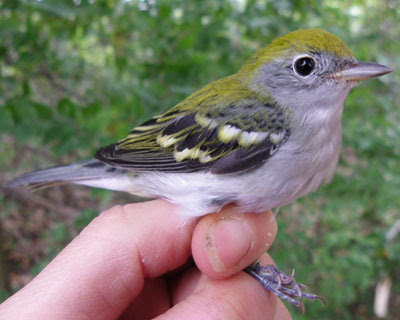 Tomorrow’s forecast is for a continued strong westerly wind. Hopefully it dies down some but I do not have hope for that. The rest of the week looks like good winds for more migrants to appear.

P.S. the quiz bird is a Bay-breasted Warbler. Note the gray legs and feet and yellowish cast to the head and back. To me it looks more of a lemony color than a lime color like the Blackpoll Warbler would have. Blackpolls would have dark legs and yellow pads to their feet with the gray streaks on their flanks. Whatever works for you to ID the fall confusing warblers, use it!

And just because I like this bird! This is the first adult male American Redstart for the season. Enjoy!