You could tell it was the end of breeding season. It was very quiet in the marsh today. There were a few hatching year birds with some adults still singing now and again. Every so often I would hear a Yellow Warbler or a Baltimore Oriole sing a short tune.

The excitement was a flicker and a woodcock! The flicker was as quiet as always. NOT! What a squawker! Note the loose juvenile feathers on this bird below. 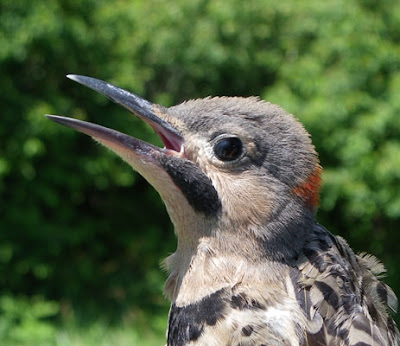 And not only was the American Woodcock cool to look at with its flexible bill, and the eye arrangement so it can see 360 degrees to detect predators; the bird told us what it thought of us when we released it on the trail from the banding table: It strutted away from the table with its short tail raised and flaired as if to say this is what I think of you! I guess you had to see it for yourself. Something you can see is the woodcock we caught was a male by the narrow outer three primaries. This is what makes the twitter sound during courtship. 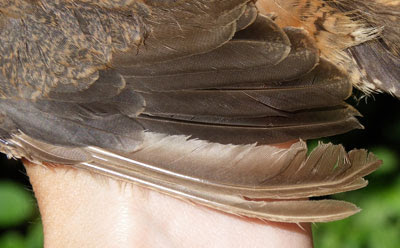 Picture of the top of its head where both eyes are visible. 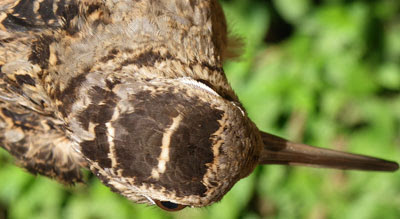 As the season dwindles, take note of the early migrants heading south in August: Yellow and Prothonotary Warblers, Baltimore Orioles, and flycatchers. Enjoy the season!