For August the weather is seasonable, full of pest insects, and the usual migrants are appearing. This is the tail end for Yellow Warblers, Prothonotary Warblers, and Baltimore Orioles. With a high pressure overhead and today a southwest wind there was not much action birdwise. I did hear a few flyover warbler chips—this means that warblers were giving their chip call as they flew over-not flying warbler chips...

This female Prothonotary Warbler graced us with her presence. She did not cooperate to show you the white markings on her tail. This is the best method for determining hatching year males from females. It can be used in the adults but usually the adult males are glowing and the adult females are only beaming in coloration. The female tail pattern has reduced white and the gray and white on the tail is a blurry line instead of large white spots on a male and crisp delineation of white and gray on adult males. 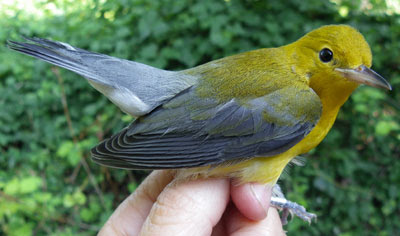 I have to start the season with a quiz bird. This makes you better at identifying birds or so I am lead to believe. Here is part one: 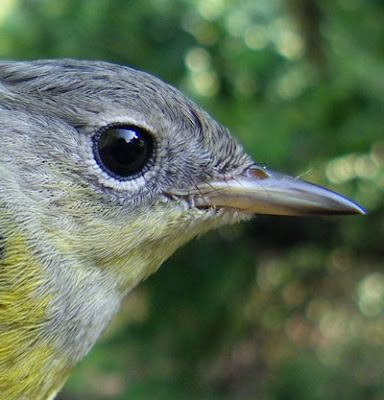 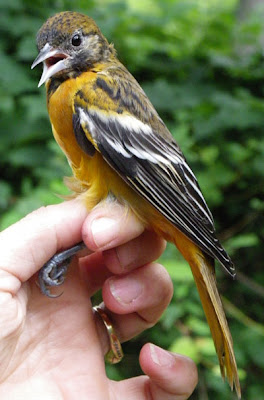 This bird was also captured with a previously broken leg that had healed. Seeing the knob on the leg indicated it was not a fresh wound. The foot was working fine. We sent her on her way wishing her a safe journey south with most leaving the country for Mexico to Panama. 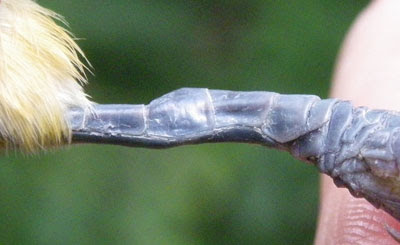 Note on the first photo you could see a split eye ring and a small pointed bill. It is not good to go off of bill color here. So how many of you have really looked at a bird. I may be causing you to look a little closer at the bird than you normally would. This photo shows the bird with wing bars. Are you getting closer to deciphering the bird? 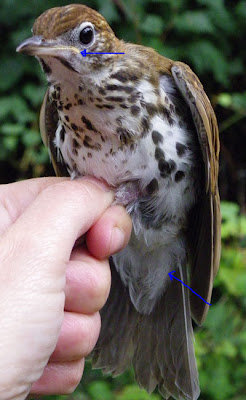 Okay the final part 3 of the quiz bird: 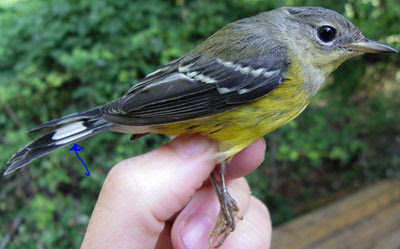 Note the white tail band that is present all year around unless of course it loses its tail feathers. See the yellow breast with fine blurry streaks on the flanks. The blurry streaks signifies it is a female. Great job if you deciphered this before the final clue!

Enjoy the early fall season because some of your all time favorites will be gone soon!
Posted by BSBO Research Staff at 3:12 PM