It is that time of year, the end of June, where we make our annual trek to West Sister Island to check on the colonial waterbirds nesting on the island. This island is the most important island for nesting herons and egrets in the Great Lakes. It holds 40% of all the nesting herons and egrets in the Great Lakes. Pretty impressive that an 80 acre island can be so important. The island is owned and managed by the U.S. Fish & Wildlife Service and was designated as a wilderness area by F.D. Roosevelt. The Ohio Division of Wildlife also is a partner in conducting nest surveys with USFWS and Observatory personnel to monitor distribution and numbers of each species of Great Blue Heron, Greg Egret, Double-crested Cormorant, Snowy Egret, Cattle Egret, Little Blue Heron, and Black-crowned Night-Heron.

Let me paint a picture of the island paradise. Imagine lush vegetation due to the fertilizer produced by concentrated nutrients from fecal material that comes from the nesting birds. The trees are predominantly Hackberry with some more than 100 feet tall. The understory is quite impressive with extra large wildflowers such as Jack-in-the–Pulpit, Solomon’s Seal, Broad-leafed Waterleaf , Stinging Nettle, and Jewelweed to name a few. There is Poison Ivy on the island that is larger than most people have ever seen. It is a big as small bushes with some having the trunk diameter of 2-4 inches. I am not kidding! The giants are an allergic person's nightmare!

This was a very successful trip with the great help of everyone from Ottawa NWR and Ohio Division of Wildlife ferried everyone over on their boats; It was a fairly warm day but the bugs only bothered us the last hour; we hit the mother load of Black-crowned Night-Herons in the managed cut tree area; and the worst part was it was the crappiest day I have ever had out there!
What do nestling wading birds do when they want to scare a predator away? Show you what they had for breakfast or shoot the recycled version of it from the other end. The smell was very fishy I must say!

We banded 128 colonial waders this trip. There may be another trip if weather cooperates and transportation is available. The wilderness area is only entered on planned minimal occasions. The herons and egrets will abandon the area or nests if disturbed early in the nest laying stages. This is why they nest on islands or secluded areas. If we return to the island this year it will be to band the Great Blue Herons and the little whites (Snowy Egrets, Cattle Egrets, Little Blue Herons). We have seen adult snowies and cattles but no Little Blues. However, an immature was seen flying from the island to the mainland. So they nest out there somewhere. The little whites are difficult to distinguish as nestlings and all of these species are white. It is best to verify with an adult bird seen near the nest. This trip it appeared that the Cattle Egrets were still on eggs. 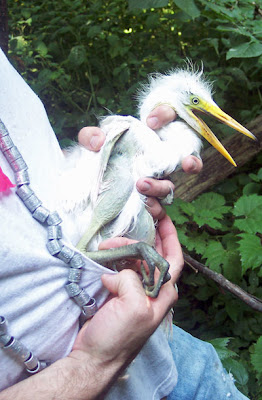 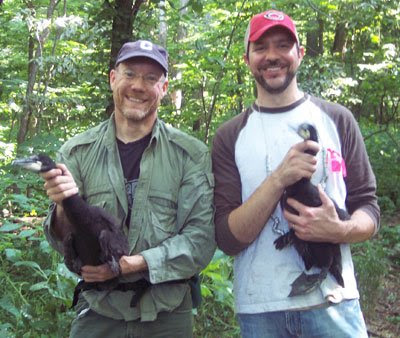 This is Cliff and Lester showing their excitement early in the day. They are holding onto the birds' heads because the Double-crested Cormorant have razor sharp bills. Their excitement waned toward the end of the trip.

This is an island paradise to the birds but I would not call it paradise for humans. We all smelled the same when we left the island and those that did not go with us could definitely tell where we had been!