Running the Navarre MAPS station was pretty slow and not eventful. The number one bird was Common Grackle. One interesting feature was that one net had 4 unbanded Yellow Warblers. With the migration station less than 100 yards away, I would have thought that this many unbanded Yellows in one net on one net check was unlikely. I guess this says a lot about site fidelity and the cueing in on the small sites for breeding. Remember this spring we captured the Nashville Warbler that we had banded a couple years ago?! This shows that at least for this one bird it did come back to use the same stopover habitat emphasizing the importance habitats for not only breeding and migration. Hmmmm...

Even better yet at the Oak Opening MAPS station yesterday, we recaptured a female Blue Grosbeak which we banded last June on the same area. Hot diggedity! The other highlights for the day at the Oaks-as I call it, was a Red-headed Woodpecker and a male Hooded Warbler! The site is not too far from Mallard Lake where I know on previous years a pair has nested there.
It was a good day for hatching year Eastern Bluebirds with their spotted thrush breasts too.
Quiz Bird! Go for it! 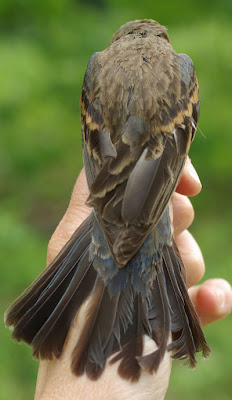 Top 5 bird species were:
Eastern Bluebird - 5
Field Sparrow - 4
American Goldfinch - 4
Eastern Phoebe -3
Indigo Bunting - 3
AND to top off the day, there had been a recent emergence of toads and frogs. They were barely over a half inch long and they were hopping off the sand trails in the tens or more. They blended in very well. A few that were caught looked like toads and some tree frogs. Boy were they cute! 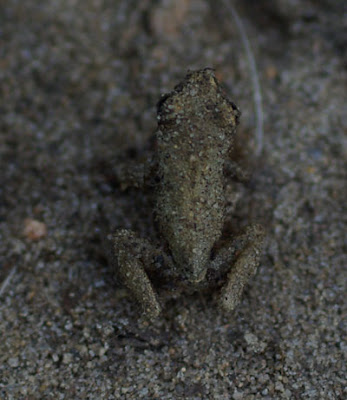 Answer to the Quiz bird below: 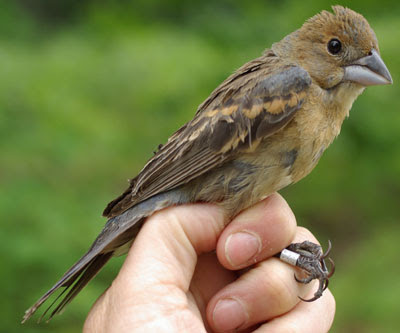 Blue Grosbeak! Looking for the male next time! For another quiz, can you tell me which Eastern Phoebe below is the hatching year bird?-yes, the babies are out! 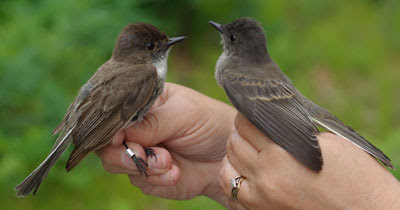 See the buffy wing bars? That bird is the youngun'!

Never a boring moment in NATURE I say! Enjoy!
Posted by BSBO Research Staff at 4:40 PM