In my opinion today was a scorcher for this latitude. There were still a few surprises to add to the end of the spring season records. The numbers were nothing to get excited about. We had 14 new birds and 17 recaptures of 9 species for the migration site in a little over 5.75 hours of net operation. In conjunction with the migration station, the Monitoring Avian Productivity and Survivorship (MAPS) station was run. The MAPS station in Navarre is about 150 yards from the migration station in similar beach ridge habitat. The MAPS station netted 25 new birds and 11 recaptures. Twelve species were captured at the MAPS station birds. 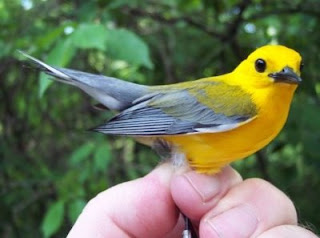 The migration station has a high competition for Prothonotary Warbler nesting territories it seems. There were at least 3 males singing out in the buttonbush swamp and this week there had been one singing in a small slough area near a net. Yesterday we caught a female there. She was caught again in the same area. Today we netted in the vicinity, two after-second year males which could have been many years older than 3 years because they had wing feathers that were spectacular looking with rounded alulas and bright gray on the coverts. They could have been great, great grandfathers or older as fine as they looked. These did not compare with any of the other males we had caught this year. 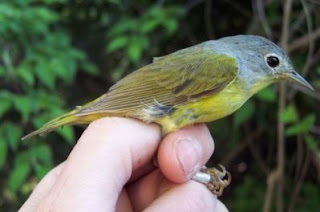 Another surprise bird this one is! (quiz bird for today)

By the way, yesterday’s quiz bird was the bird with yellow legs and black head (black poll) female. If you remember in the fall, the Blackpoll Warbler has yellow pads to its feet which is all that is left of the yellow of its legs and feet in fall. Are you ready for fall warblers? The fun will begin in late August…

The surprise for the MAPS station was this female Ruby-crowned Kinglet female. This is a late bird!

Stay cool and enjoy the outdoors!