Quiz bird answer for June 6th in the spring blog is female Nashville Warbler for those of you waiting in anticipation for the answer.

Today forces were split up between two Monitoring Avian Productivity and Survivorship (M.A.P.S.) breeding bird sites (Oak Openings-Ostrich Lane and the Navarre site). The Navarre MAPS site includes 10 nets in similar habitat as the migration site but located 100 yards north. The Ostrich Lane site is located on Metroparks of the Toledo Area. The Observatory has a great relationship with those fine people. We have 16 nets where 4 nets are stationed in four different managed habitats which are Oak Savanna- understory with sparse trees, Forest with understory-control area, grassland dune area, and early successional area. Nets were run for 6 hours and numbers of birds were very similar with Navarre capturing 23 new and 7 recaptures and Ostrich Lane capturing 19 new birds and 7 recaptures. 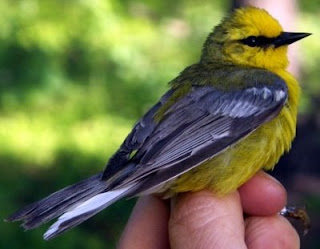 Highlights of the Navarre MAPS station was an Acadian Flycatcher and a molting Northern Waterthrush. The waterthrush is inevitably not going to breed this year. It had already begun its symmetrical wing molt which is done in adults after the breeding season is over. For some reason it will not breed this year. 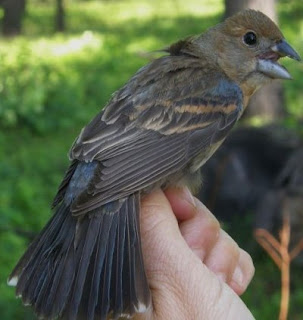 Highlights of the Ostrich Lane site were a female Scarlet Tanager, male Blue-winged Warbler, and a female Blue Grosbeak! She was beautiful! For a female with her chestnut head and blue rump and wings, she outshined the male because he did not show his face. She was nice-looking regardless of that fact. The male sang in the savanna habitat which was where the female was captured. Hmmm… not typical habitat to find a Blue Grosbeak. There was another pair at the south end of the banding site too. Their populations must be increasing or at least at this site. The female was a second-year bird and may possibly been an offspring of the birds seen in the area last year. We did capture a female in the early successional area last year.

The weather is great to get out and learn some bird songs so take the opportunity to expand your song repertoire!