A Few Good Birds this week in NW Ohio

The week of April 23 was not a knock out bird number wise but resulted in good opportunities to teach our new volunteers and give them one on one training. The week had good diversity but little volume due to the lake winds blowing on the beach ridge. Seven species of warblers were captured this week (Yellow (YEWA), Western Palm (WPWA), Black and White Warbler (BAWW), Myrtle Warbler (MYWA),  Black-throated Green (BTNW), Pine (PIWA), Nashville Warbler (NAWA)) and 11 species of warblers were seen/heard at the station.


Highlights for the week were capturing a Red-headed Woodpecker (RHWO) and a banded Red-bellied Woodpecker (RBWO) in the same net. They were very vocal as these woodpeckers normally are and could be heard several nets away. The RBWO was banded in 2011 and the RHWO was banded this week as a Second Year bird (SY). Note the brown primary coverts on the RHWO. 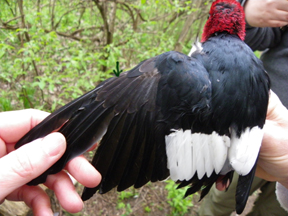 Other highlights were a result of the cooler temps from the lake winds which brought the swallows down to lower heights in search of insects. A few found their way into our nets. This gave us an opportunity to see birds that  spend a lot more time on the wing than in the hand. Barn Swallows (BARS), Tree Swallows (TRES), and a Northern Rough-winged Swallow (NRWS). 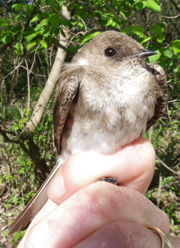 We had a view of a "rough wing" up close and personal. Little is mentioned in the literature on the reason for the "rough wing" on this species. Some think it may be used in courtship. The leading edge of the wing has serrations and  the shape of these serrations determines the sex and age of the bird. How cool it is that?

Here is the NRWS wing. 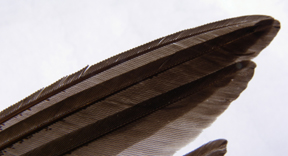 Compared to a TRES wing.

And who can resist the close-up look at BARS? 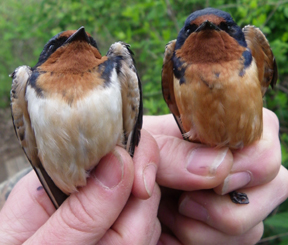