Summer Birds of the Oak Openings 2011

After the tornadoes of June 2010, many changes have been seen at the Oak Openings Ostrich Lane site this summer. Most have been changes in species using the different habitats. The once closed canopied woods is now more open with considerable more light reaching the floor and fewer mature trees. These conditions have resulted in more Eastern Bluebird, Red-headed Woodpecker, Eastern Towhee, Chipping and Field Sparrow usage.

Here is a photo of a Hatching Year Eastern Towhee (EATO). This is a female with its brown wings. Note the eye color is not ruby red as an adult bird would have. 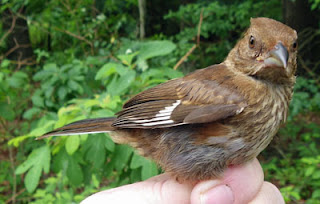 Here are some of the highlights of the Summer for you to enjoy! 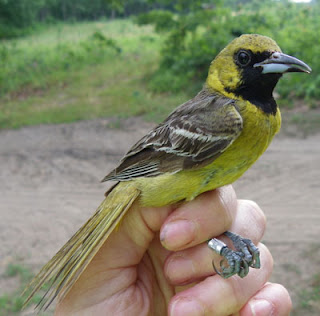 A Second Year male Orchard Oriole (OROR) with his
green coat and black mask.
A quiz bird for you to ponder.
This is a Hatching Year bird. 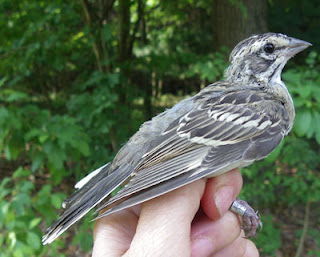 Here is the front view of both the adult and immature quizbird. 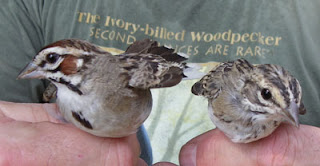 We don't often get a nice view of the backs of birds, so here is a dorsal view to help with identification and give you another perspective. 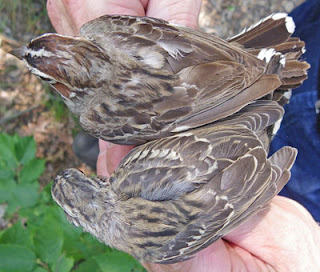 Another great bird was this Hatching Year Hairy Woodpecker (HAWO). 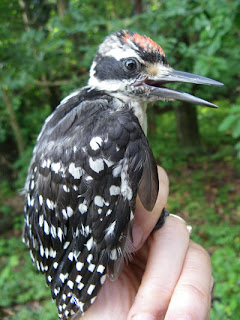 Look how large the beak is compared to its cousin
the Downy Woodpecker (DOWO) below. 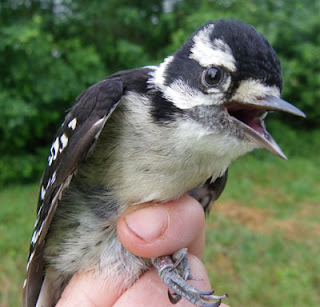 A nice catch was this Hatching Year male Rose-breasted Grosbeak (RBGR). HY males looks like females --  until you see the color under its wings.
A female would have yellow-orange axillaries. 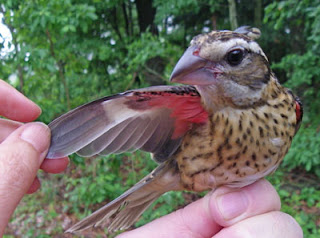 And the grand finale for this post is this cool nest
that was found the end of July. 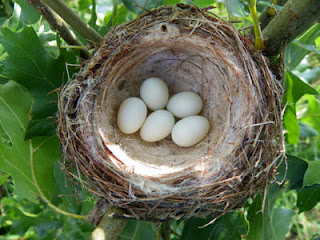 The species that built this lovely nest is one of the last nesters of the season, waiting for the thistle to go to seed to make its nest.

This nest had 5 eggs. 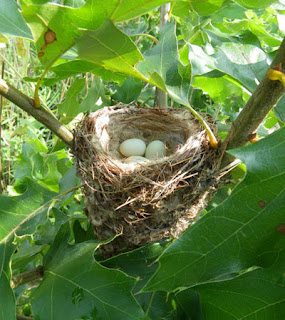 Enjoy the beauty of the season!
---The answer to the Quizbird is Lark Sparrow!
Posted by BSBO Research Staff at 10:00 PM