From the BSBO Songbird Banding Station in the Navarre Marsh Unit of Ottawa National Wildlife Refuge, Mark and Julie Shieldcastle write: Last week was the start of the spring migration banding season for Black Swamp Bird Observatory's Navarre Station located in the Lake Erie Marsh Region on FirstEnergy property. We've been able to band on only four of the past seven days due to consistent rains. Last Sunday, April 24th, was a precursor to today's activity, with Hermit Thrush (HETH) and White-throated Sparrow (WTSP) leading the first wave on the first good gust of SW winds.
Today however, saw the full-fledged First Wave of migrants hitting the Lake Erie Marsh Region. Fog was setting in this morning with a light lake breeze as nets were opened. By 10:00 AM the winds had shifted to the SE and the skies had cleared. It was apparent that the front had finally made it to the coast. The front had reached to within 50 miles of the lake by day break. Migrants tend to "balloon" ahead of storm fronts resulting in today's excitement. Now that the First Wave has arrived, the "Warbler Capital of the World" will start to earn its moniker.

A total of 369 birds were banded today of 37 species, with one returning Gray Catbird (GRCA), banded at BSBO headquarters in September 2008 as a Hatching year (HY) bird of unknown sex. While not the soul purpose of banding, it is recoveries like this that perk the inquisitive. Was the banding location (about seven miles from Navarre) its home, or where it dispersed to? Does its capture in Navarre indicate the importance of the largest remaining beach ridge? Will it now will search out its home? Were both captures really miraculous and its journey not yet complete? Questions...always more questions... That is why we do what we do.  To understand is to appreciate; to appreciate is to conserve for the future.

A total of 86 species were seen or heard in the marsh today. Highlights for the day--in addition to the warblers--include: Immature Red-tailed Hawk (RTHA)(going after Blue Jays in the mist net - and, no he didn't get any!), Yellow-throated Vireo (YTVI), Yellow-bellied Sapsucker (YBSA), Least Flycatcher (LEFL), Savanna Sparrow (SAVS), and Purple Finch (PUFI). 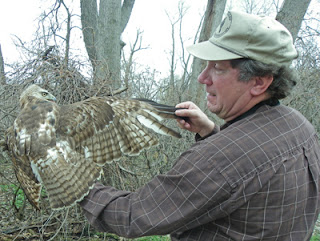 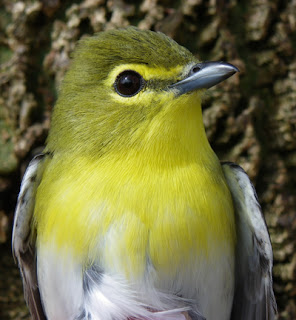 No one can deny the beauty of this Yellow-throated Vireo. Note the stout gray bill with a hook at the end. 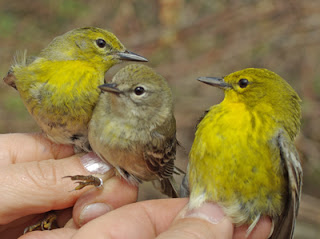 An unbelievable six Pine Warblers (PIWA) were captured. We have never caught more than four total in a whole spring before. Pictured here from left to right are adult female, second-year female (hatched last year), and adult male. Notice the difference in the amount of yellow on each age and sex of the Pine Warblers.
﻿
﻿

Most people don't think "beautiful" when they think of sparrows. But, having the bird in hand helps us appreciate the artful arrangement of the field marks  on this Savanna Sparrow. Beautiful, indeed! 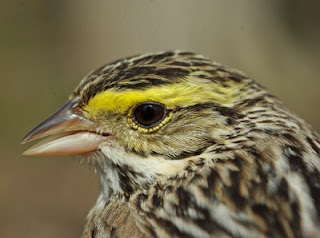 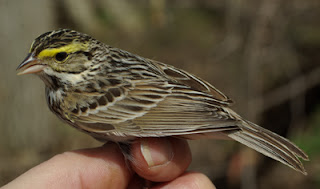 ﻿ ﻿ ﻿﻿
﻿﻿﻿﻿With southerly winds forecast overnight, tomorrow looks like another good day for migration. Will there be more "overflight" warblers? Will Myrtle's and Blue-gray Gnatcatchers seem to be everywhere, again?  Will more of the "one ofs" make an appearance. Get out and experience the magic of migration and see if you can answer these questions for yourself. The FIRST WAVE is here!
Posted by BSBO Research Staff at 11:07 PM