After the third try to get to the 80 acre West Sister Island which is about 9 miles north of the Magee Marsh State Wildlife Beach, banding and nest surveying crews made it to the island. Being dependent on a boat that runs and good lake traveling conditions makes it a challenge to get to the island. There are other challenges once one gets to the island. Most days it is bugs, large poison ivy trees (vines with 3 inch or better diameter standing up like a tree), unexploded ordinances, and other natural unexploded ordinances from the nests above prove to make the day very eventful. That is why it is a National Wilderness Area, it is for the birds! Not for humans.
They nest on the island to get away from humans. Nesting herons and egrets are susceptible to nest abandonment if disturbed in the nest building and early incubation stages of breeding. That is why they tend to nest on secluded islands away from people. Black-crowned Night-Herons are an Ohio state listed species and require certain habitat components to nest successfully. The main requirement is smaller trees less than 20 feet to build their nests.West Sister Island is owned by the U.S. Fish & Wildlife Refuge-Ottawa NWR. The crew that ventured to the island were refuge, Ohio Division of Wildlife, and Observatory personnel. State and Federal Wildlife personnel and Mark Shieldcastle, BSBO Research Director conducted nest surveys and the Observatory along with refuge interns conducted the banding of the nesting colonial birds.
We were almost two weeks later than we wanted to be first getting to the island, so the chicks were big chicks. Here are the beautiful looking Black-crowned Night-Heron chicks when they are a few days old: 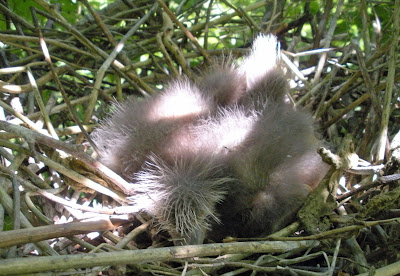 And here they are when they are a week to 10 days old: 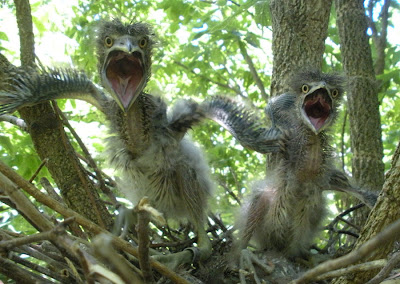 They do not like nest invaders so they make themselves look big and scary! It did not deter us mighty banders. They look scary but have fleshy beaks so not so painful as a cormorant or egret.Here is how we got to the nests with a ladder which John Sawvel the ladder man carried and manuevered among the trees for us to band 87 birds this day. Here is John and Debbie the refuge intern at a Night-Heron nest. 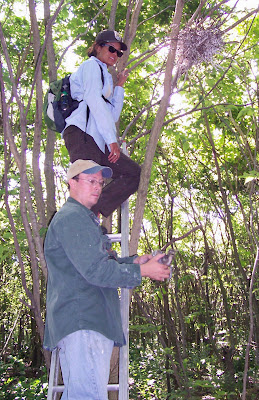 Ken Keffer, BSBO Education Director was my second bander for the day. He is holding a Great Egret chick to be put back in the nest tree. 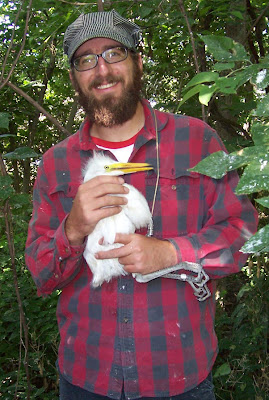 Small white chicks of Snowy Egrets and Cattle Egrets and occasionally Little Blue Herons all nest on the island and look very similar. Here is Kyle, a Youth Conservation Corps student with a Cattle Egret chick. 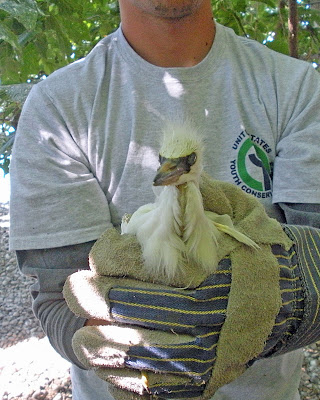 They all look pretty clean but this is not a clean job nor does it smell like roses on the island either. The chicks method of deterring predators is to either show us what they had for lunch or show us the recycled version. When you are fed fish and crayfish, what is it going to look and smell like? Roses of course! Here is what happened while I was talking on the radio to the refuge manager Doug Brewer. I guess this bird told us what he thought of us! 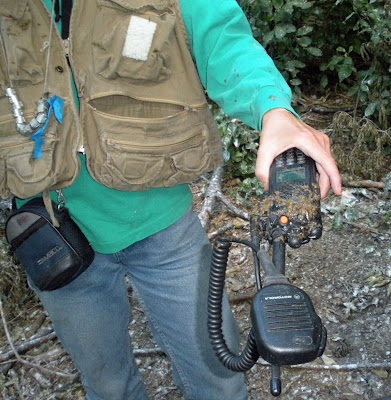 It is an island paradise for the birds. The island holds 40% of all the nesting herons and egrets in the U.S. Great Lakes. It is an important island to these birds and we only disturb them once or twice during the chick season. It is with great thanks to the Ottawa NWR and Ohio Division of Wildlife for sharing the ride to West Sister Island and allowing us to band the herons and egrets. It is truly a cooperative effort to learn about the life history, wading bird ecology, and understand what these birds require on this very important island.
Posted by BSBO Research Staff at 12:49 PM